I’m a big believer in natural medical care, including dental. For the first time in my life I’m having some problems with my teeth. I had to get a filling. It wasn’t too hard to find a metal-free filling. However, I’m trying to find a crown for a back tooth. My dentist insists I need a metal-based crown. I really don’t want that. Do I have an option? 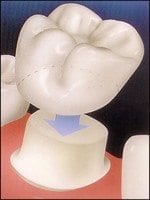 It used to be that you couldn’t get metal-free anything. Then, we finally got composite fillings. You’d think dentists would have jumped on these quickly and rushed to learn the technique. Fillings without mercury. That seems like a no-brainer. Yet, there are still dentists who insist on amalgam fillings. Don’t ask me why.

Fortunately, things are changing. These days you can get metal-free dental care for just about any procedure if you go to the right dentist.

In your place, I’d do an internet search for a metal-free dentist. There are a lot of options for metal-free crowns. On front teeth, you can just get an all-porcelain crown. These look more natural and will never develop a gray line at the gumline the way metal-based crowns will.

However, all-porcelain crowns aren’t strong enough for back teeth, which is likely why your dentist is saying no. However, there are options now.

For something strong, I would recommend you get a zirconia crown. These hold up very well against biting forces. In fact, they’re nick-named ceramic steel. They’ll do just fine on a back tooth.

Just be aware, just like any dental work, the color you get them when you have them made is permanent. While it’s very stain resistant, teeth whitening will not work on it. Even professional whitening only works on natural tooth structure.

If you plan on bleaching your teeth at any point, you’ll want to do it before you get your crown made.

I hope this helps.
This blog is brought to you by Decatur Dentists Drs. Drake and Wallace.

I’m getting used to having medical people think I’m nuts, but at this point in my life, I know my body. Every time there is metal involved, I feel awful. I want to get rid of my metal fillings. I think they’re giving me problems. I took a Clifford’s test and it did show I have quite a few metal sensitivities. My dentist feels like it’s bunk. So, what I’m asking is will every dentist feel this way and I just have to deal with it or is there a chance there’s a dentist out there who will take me seriously?

I understand what you’re going through. Many dentists still find the Clifford’s test to be controversial. Notice I said many, not all. That’s the good news for you. There are dentists out there who will take you seriously and work around your metal sensitivities.

Your best option is to find a metal-free dentist. However, the limitation for you is to find one who also knows how to safely remove amalgam fillings.

Make sure you ask whatever dentist you’re considering whether or not they know the procedure for sanitary amalgam removal. The mercury in the silver fillings causes a danger to you. You want your dentist to know the steps to prevent you from swallowing the pieces or inhaling any mercury vapors. Most mercury-free dentists know how to do that.

I’m guessing your dentist quoted to you the fact that the ADA has proclaimed after numerous studies that amalgam fillings are perfectly safe. What he probably didn’t mention is there are as many studies done by other groups which say they aren’t. Much of the difference has to do with the conditions under which the tests were performed. For instance, the ADA’s tests were done under static conditions, whereas the other tests were done under real-world conditions.

Regardless of the amount of release of mercury from the fillings, that’s not your actual problem. You’re allergic to the metal. They could be perfectly safe for millions of people, but that doesn’t change your allergies.

What Metal-Free Services are Available?

In addition to metal-free fillings, which are worlds better for your teeth than their silver counterparts, you can also get all-porcelain dental crowns or Zirconia Crowns. You no longer have to get a metal-based crown. In fact, most dentists should discourage them on front teeth. They are remarkably unattractive looking, which isn’t what you want in your smile. Plus, they always develop a gray line at your gumline. Also not a pretty smile feature.

Additionally, you can now get metal-free dental implants. Using zirconia instead of titanium you can have a dental implant which won’t affect your allergies in any way whatsoever.

This blog is brought to you by Decatur Dentists Dr. Drake and Wallace.